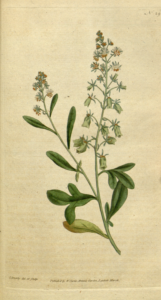 About the naming of »Receeda«

The company name »Receeda« is derived from the so-called »Reseda« plant (scientific name: Resedaceae) and also stands for a shade of green that alternates between olive tones and the color of a wooded natural area. The plant height is between 25 and 120 cm and bears white or yellow flowers. It blooms preferably between June and September. Some plant genera like the »Reseda luteola« were formerly used to dye textile fabrics and various materials. The German name »Färber-Wau« (dyer’s woof) originated from this characteristic.

The first written dyeing instructions are already known from the 8th century from recipes for craftsmen in southern Italy. Besides the »Reseda luteola«, the »Reseda odorata« is still used today as a bee pasture because of its fragrant properties.

The scientific name »Reseda« is derived from the Latin »resedare« for still/soothe/alleviate/heal, as some species were already used by the ancient Romans as a remedy. The German and popular name »Wau« is derived from »Wouw(e)«, the Dutch name. The Reseda is a hardy plant and thrives even under challenging conditions such as graveled ground.

Through our focus on combining mobility, energy and environmental issues and harmonizing digitalization and infrastructural issues, the name and the characteristics of the Reseda plant as a useful and robust species form the starting point of our company philosophy. Through our commitment we want to create added value and contribute to the solution (alleviation) of challenges. We also want Receeda to have similar resistance and robustness, even in challenging subjects (market) environments.

Together with you, we design future-oriented concept, solution and business models and integrate current environmental issues within an ecosystem. Realize a »Wow (Wau) effect« for your company with us.

The Reseda in literature

Bring in the mignonettes‘ fragrant spires,
the last red asters on the table lay,
and let again us speak of love’s desires,
like once in May.

Give me your hand in furtive, sweet advances –
if people see it, mind not what they say:
Give me just one of your delighting glances,
like once in May.